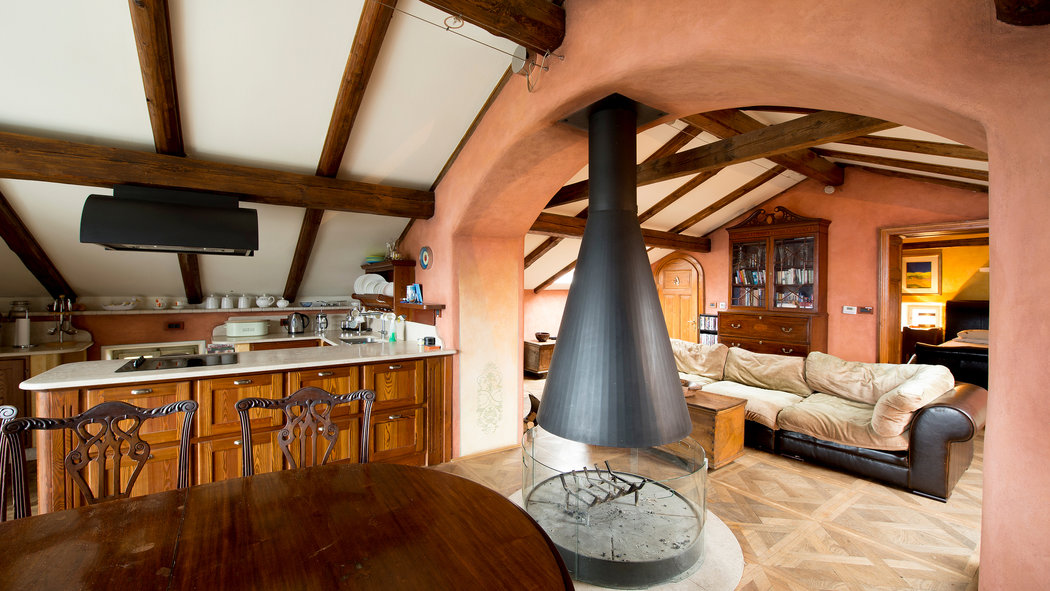 A FIVE-BEDROOM COUNTRY HOUSE WITH VIEWS OF THE JULIAN ALPS

This three-story stone-and-stucco farmhouse outside of Most na Soci, a town in the foothills of the Julian Alps near the Italian border, dates to the 19th century and has about 3,000 square feet of living space. A renovation in 2007 highlights historical features like exposed wood beams and plank floors, but also offers modern luxuries like radiant heating in some rooms, two fully equipped kitchens and sleek bathroom fittings. The nine-acre property has a pool, terraces, and extensive gardens and plantings. Much of the vintage furniture will be included in the sale, said Eva Jakopin of Elite Property Slovenia, which is listing the property.

A flagstone driveway descends to the house, which is entered through two traditional carved wooden doors into a hallway. On the first floor, partly set into the hillside, is a spacious dining room with a table that seats 10; an arched doorway leads to a kitchen with custom-built cabinetry, a stone floor and a large double-basin farmhouse-style sink. Most of the appliances, including a gas cooktop and electric oven, are by Ariston.Also on the first floor are a guest bedroom, a bathroom, a sauna, a laundry room, a wine cellar and a television room. On the second floor, which is reached by a  hand-carved rustic oak staircase, are three en-suite bedrooms, all with wide-plank wood floors and exposed ceiling beams.

Up another flight of stairs on the third floor is yet another en-suite bedroom, and a combination living/dining area with a small kitchen and a circular wood-burning stove in the middle of the space. The parquet floor comes from a historic building in Ljubljana, the capital, Ms. Jakopin said. A double-height picture window with a door that opens to a small terrace affords spectacular views of the high peaks of the Julian Alps.

Outside are a kidney-shaped pool with a large deck, a dining area with a stone oven, and numerous spots to sit and admire the views. Plantings include fruit trees and an herb and vegetable garden set into the old foundation of an outbuilding.

The town of Most na Soci, which means “bridge over the River Soca,” is a little over a mile away, and has restaurants and basic necessities. It is at the confluence of the Soca and Idrijca Rivers, and activities in the area include fishing, canoeing and hiking. Just to the north is Slovenia’s only national park, Triglav. Most na Soci is less than 30 minutes’ drive from the Italian border, and about an hour and a half from both Ljubljana and Trieste, Italy. The ski town of Kranjska Gora, on the Austrian border, is also about an hour and a half.

Most Slovenes lived in rental housing after World War II under the Yugoslavian government of Josip Broz Tito, said Barbara Por-Hrovat of Agencija Barbara in Ljubljana, who has been in business in Slovenia since 1994. After independence in 1991, a government program allowed residents to buy their properties at very low prices, which has resulted in an extremely high homeownership rate, she said, though that is falling as new rental properties are being developed.

Foreign buyers have gravitated toward the largely car-free old city of Ljubljana, the resort areas around Lakes Bled and Bohinj, the Adriatic coast and the ski areas along the Austrian border to the north.

“The natural beauty of the place, the greenery, the mountains, is the main reason why people first stumble across Slovenia,” said Justin Young of Slovenia Estates, a real estate company in Ljubljana. “The geographical location is superb,” he added. “You can drive from one end of the country to the other in two and a half hours. You can drive to Italy for lunch.”

Starting at the low end, buyers can find country homes in need of renovation in the east for well under $100,000, agents said. For $100,000 to $300,000, buyers can choose from among apartments in Ljubljana or small chalets in the Alps or lakes region. Properties priced up to around $1 million include the best city apartments, and luxury homes around the lakes and outside Ljubljana. The very highest prices — well over $1 million — are found at the coast.

Prices increased sharply in the years before the recent recession, agents said. “In 2006-7,  prices rose at a ridiculous rate. It was unrealistic,” Mr. Young said. “It was getting to the point where prices in Kranjska Gora were no different from that in Austria. And that shouldn’t be the case — this is still Slovenia, after all.”

The resulting price drop of 20 to 40 percent, depending on the region, “was correct,” he said. “I think prices now are correct when you compare them to other European cities.”

Sales volume and interest appear to have picked up in the past year, agents said, but looking ahead “is a tough call to make,” said Dan Bendall of Think Slovenia, a real estate company in Ljubljana. “Slovenia’s such a small country and it’s very dependent on what happens around it.” Data provided by Mr. Bendall show transaction volume rising sharply since the third quarter of 2013, while prices have continued to fall since a momentary rebound in early 2011.

WHO BUYS IN SLOVENIA

The largest proportion of foreign buyers have traditionally been British, agents said, but Russians now make up a substantial segment of the market. Mr. Young of Slovenia Estates said that about 40 percent of his buyers in the last two and a half years were Russian, but that he expected that number to fall with the slump in Russia’s economy. Smaller numbers of buyers also come from other European countries and the United States.

British purchasers were among the first to buy and renovate less expensive properties in the rural east, and they have a substantial presence in the west around Lakes Bled and Bohinj, the ski valley of Kranjska Gora, and the Soca River valley, Mr. Young said. Russians and Ukrainians have bought properties along Slovenia’s small but attractive coastline, agents said, and apartments in the old town of Ljubljana appeal to investors and Americans.

“Buying costs are very low here,” Mr. Young said. He and other agents said buyers typically paid half the usual 4 percent commission on transactions. Legal, notary and translation fees usually total about 500 euros, or around $600, he said, depending on the size of the transaction.

Mr. Young and other agents said there were no restrictions on buyers from the European Union or the Organization for Economic Cooperation and Development, including the United States, although they will need to obtain a tax identification number. But buyers from other countries, including Russia, may need to form a corporation and purchase the property under that name.

The annual property taxes are about 300 euros a year, according to Ms. Jakopin.

For the original article in The New York Times please follow this link.