Article that appears in the current Easyjet inflight magazine. Please note it’s about Prekmurje, not Western Slovenia as the title states. A downloadable PDF is accessible at the bottom of the page.

Amid the vineyards and orchards of western Slovenia, an international, expat community is putting down roots. And it’s not hard to understand the attraction… 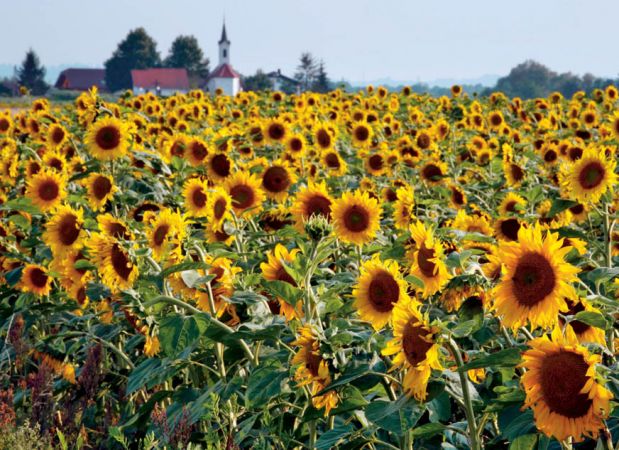 Feeling tired? Why not take a load off in the nearest country pub? Order a frothy pint of ale at the bar and settle down to sip it in a cosy corner beneath a poster showing The Rules of Cricket or pictures of Laurel and Hardy. If the weather’s good, perhaps a cider in the sun on the leafy terrace might be hard to resist. You’ll probably find a regular with whom to discuss England’s performance in Euro 2012 or groups of Brits chatting about – what else? – the weather. It’s the kind of scene that will be familiar in countless pubs across rural England. However, Bar Na Kujkli is not to be found in the Home Counties, or even in the UK for that matter. In fact, it’s in Slovenia.

Until recently, the quiet, sparsely populated Prekmurje region in the far north-eastern part of this small, central European nation was little known – even to many of the country’s own residents. In recent years, though, it – together with neighbouring Maribor and Ptuj – has become an unlikely hotspot for international property buyers.

As the beer ‘n’ darts décor of Bar Na Kujkli suggests, the English led the way, heading here in droves after the country joined the EU, but it’s not just the Brits queuing up. Austrians and Germans are also frequent buyers, while even folk from Holland, France and as far as Finland and Estonia are snapping up holiday homes, buy-to-lets or family abodes.

Indeed, since 2004, citizens of 21 countries have invested in the region, and many of them can be found enjoying a regular Sunday meet-and-mingle at Bar Na Kujkli, “The Corner Pub”, in the country town of Murska Sobota. This pub is so well-known in the area as an international melting pot, it has even become a case study for the EU-funded social research project, DERREG (Developing Europe’s Rural Regions in the Era of Globalization; derreg.eu), which is examining how rural areas are changing in the 21st century.

So what’s attracting all these foreigners? Louise Samuel is one of those who’ve invested here. In 2004, she was living in London with her husband and two small children when she began to think about moving abroad. The family considered popular destinations like Spain, but her grandfather had recently visited Slovenia on a choir tour and said it reminded him of England 30 years ago. The Samuels drove all over the country, but it was only when they encountered Prekmurje’s farming community that they felt at home. “As soon as we crossed the Mura River, people were so friendly and helpful,” says Samuels.

It’s also seriously pretty. Even within the geographical context of Slovenia – which contains myriad landscapes, from Alpine peaks to Adriatic coastline – western Slovenia is something special. Lying to the west of the Mura, on the border with Hungary, Prekmurje combines surreally flat plains with the rolling hills of the Goricko Nature Park. Like a giant, fertile garden, it’s covered with vineyards and orchards, dotted with traditional cottages and farmhouses, and home to one of Slovenia’s largest castles at Grad.

An extra incentive is the local diet; its food is as wholesome and tasty as its agricultural traditions might suggest. Local specialities include prekmurska šunka (dried ham), gibanica layer cake (with poppy seeds, soft cheese, walnuts and apples) and goulash-like bograc – a reminder of the area’s historical Hungarian influences. There’s also excellent wine from the region’s critically acclaimed vineyards, and many thermal spas. “It’s like a mini-Tuscany,” says Samuel of the place that has been her home now for eight years, and has welcomed many others since.

Justin Young, of the Ljubljana-based Slovenia Estates agency (sloveniaestates.com), says that between 2004 and 2007, as many as 150 properties were bought in the area by people from the UK. Since then, he has sold hundreds of properties across the country to foreign buyers.

While the local market wasn’t spared the effects of the financial crisis, recently Young has noticed a recovery, particularly in this region. He says about 20% of his business is currently in Prekmurje. “In 2009 and 2010, interest slipped due to the global crisis,” he says, “but since early 2011, sales in the region have regained strength.”

Unlike some countries with large expat communities, one of the attractions for new residents here is the chance to integrate with the local community. “It’s not a typical expat community at all,” says Samuel. Her children have settled well in Slovenian schools and she has found the area, with its low crime rate, ideal for bringing up a family. “I have had two children in Slovenian hospitals,” she says, “and the care and expertise I received was far superior to that which I had back in the UK.”

Almost as important for daily life are the great transport links. Samuel needs to travel regularly for her business, selling the equipment and teaching the methods used for making traditional Hungarian kürtös kalacs, or chimney cakes (kurtos-kalacs.com), and she makes good use of these. “Budapest and Vienna are 2½ hours away, Graz is only an hour,” she says. “People call it ‘Eastern Europe’, but for me it’s more central Europe.”

Since a new motorway was constructed in 2009, Slovenia’s capital, Ljubljana, is comfortably commutable and it’s just 40 minutes to Maribor, Slovenia’s second city and this year a European Capital of Culture. In the foothills of the Alps, just below Pohorje (Slovenia’s biggest ski area), Maribor is earning a growing reputation as a tourist destination. The city produces excellent wine – it’s the location of the world’s oldest vine – and offers a diverse range of cultural events, such as its lively and eclectic summer Lent Festival on the banks of the river Drava, whose programme ranges from jazz to opera to street theatre.

Despite all of this, the property prices are still generally lower than in other parts of the country. “Compared to the rest of Slovenia, Prekmurje is much better value,” says Frances Sargent, managing director of UK-based company Slovenian Properties (slovenianproperties.com). Sargent advertises properties on behalf of several agencies, and, according to her, prices in the region have not risen at all since Slovenia joined the EU in 2004 – and they have, in some cases, actually witnessed a drop.

Justin Young reports that more luxury homes are being built (or converted from old buildings), but a lot of interest still tends to be in lower-priced properties (usually between €30,000 and €50,000) in need of renovation.

Colin and Alison Hull moved to a house in the village of Motvarjevci right next to the Hungarian border just over a year ago and have spent most of their time since doing it up. “The area is so pretty and the locals have really accepted us into their community, often sharing a wine or two,” says Colin. “We get invited to grape-picking sessions and – being a farming community – the area changes daily. The pace of life is very relaxed.”

Sargent, who offers a ‘gold service’ with personalised advice, says that although the Goricko area is the best known, excellent deals can be found a little further west as well. “It’s worth searching the other side of the Mura River to Prlekija, and the wine-growing districts around Maribor and Ptuj,” she says, where some properties are on the market for as little as €15,000.

Paul Wadkin, from Yorkshire, bought and renovated a small farmhouse in Krapje, near Ljutomer just west of the Mura, six years ago with his partner and daughter. “We’ve landed where we should be – it’s like Bali Ha’i [the exotic paradise in the musical South Pacific],” he says. “We’re surrounded by hills, spas, lakes and rivers.” He relishes the region’s excellent walking and fishing opportunities, and the couple have founded the company Simply Cycling Slovenia (simplycyclingslovenia.com), operating tours in the local area and Austria.

Wadkin’s sister also instantly fell in love with the place, buying a house the first year she visited. Along with the recent first wedding between two resident English people in the region (which made the local news), it all underlines how easy many find it to call this place home. Louise Samuel has no regrets. “If I had to start over and I was offered a choice of where to go in Europe,” she says, “I would definitely choose here again.”

WHAT YOU GET FOR YOUR EUROS

There are bargains galore to be had around the wineries of western Slovenia.

NEEDS WORK A small former watermill, built in 1700, 3km from Ormož in Prlekija and near the wine hills of Jeruzalem Ormož. It has a small garden with fruit trees, but requires full modernisation. Good transport links. €14,900 through slovenianproperties.com

FAMILY HOUSE This three-bed home, 40 minutes’ drive from Maribor, has a garage and wine cellar, small vineyard and woodlands. Its decor needs some updating. €55,000 from slovenianproperties.com

PDF version of the article downloadable below.