House Hunting in Slovenia: Tucked Into the Trees for $908,000

In and around the Slovenian capital of Ljubljana, real estate professionals are ready to get their market growing again. 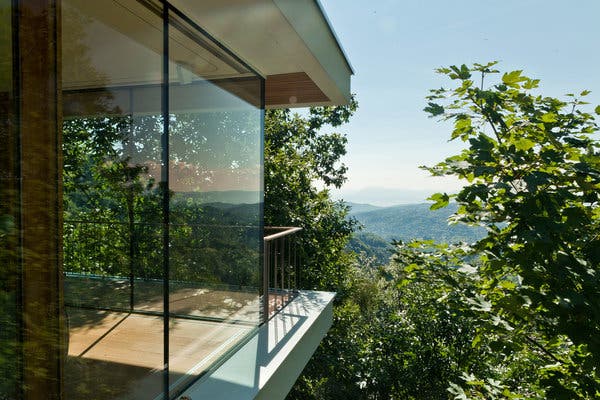 A Three-Bedroom Villa on a Hillside in Slovenia

This two-story, 2,350-square-foot house is tucked into a grassy hillside in Topol pri Medvodah, a quiet village just outside Ljubljana, the capital city of Slovenia.

Built in 2013 on about a third of an acre, the three-bedroom, two-bathroom villa offers panoramic views of the Polhov Gradec Dolomites, a pre-Alpine hilly region in northwestern Slovenia, from its south-facing facade of windows.

Winding terrazzo steps lead through the grass to a terrace on the home’s eastern side, where sliding larchwood panels open to a second-floor living space with an open kitchen, dining area and living area. The 1,076-square-foot space has floor-to-ceiling windows, a long balcony to the south and a large terrace facing west. The north side has a coat room, powder room, second kitchen, and utility and storage rooms.

The living area has a central wood-burning fireplace and is furnished with contemporary pieces, most of which are included in the asking price, said Justin Young, chief executive of Slovenia Estates, which has the listing. 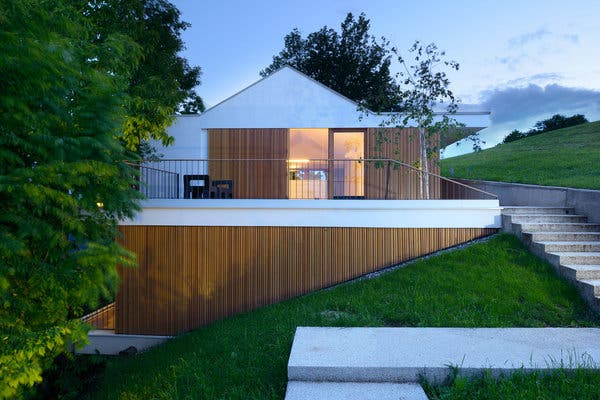 Winding terrazzo steps lead through the grass to a terrace on the home’s eastern side, where sliding larchwood panels open to a second-floor living space with an open kitchen, dining area and living area.Credit...Slovenia Estates

Floors are oak parquet, and much of the home’s built-in furniture, such as shelves bordering the dining area, are oak. The open kitchen has an island with cabinets and Corian countertops, hiding an under-counter refrigerator and dishwasher. The second kitchen has a full-size refrigerator and an oven by Gaggenau.

A stairway near the kitchen descends to the first floor, where there are three bedrooms and a large main bathroom. The master bedroom has a built-in bed and wardrobe, and a sliding-glass door opens to a balcony. An adjacent bedroom with built-in beds also opens to the balcony. The bathroom has a walk-in shower and large sunken bath by Gessi.

The home was designed by the Ljubljana-based architecture firm Multiplan Arhitekti to be ecologically sensitive, with solar panels on the roof and an oil burner for heating. A separate garage with a sustainable green roof can hold one oversized vehicle. Built to maximize natural ventilation, the home does not need central air-conditioning, though the ductwork is there, Mr. Young said. Pipes have also been installed for a swimming pool. Shade from the chestnut, oak and poplar trees on the property cools the house during hot weather.

Topol pri Medvodah, a village of about 150 people in the municipality of Medvode, is 10 miles west of Ljubljana, Slovenia’s capital and largest city, with about 293,000 residents. Outdoor activities like hiking, cycling and trail running are popular in the heavily forested area. The Krvavec ski resort is about 30 miles north, while the Adriatic Sea beach towns of Portoroz and Piran are about 75 miles southwest. Ljubljana Joze Pucnik Airport is 20 miles north.

Slovenia, a verdant country of just over 2 million residents that borders Italy, Austria, Hungary and Croatia, saw housing prices rise for a fifth straight year in 2019, with a 5.2 percent increase over 2018, according to the Republic of Slovenia Statistical Office.

Although Slovenia’s economy slowed in 2019 overall, housing sales accelerated, with an 11.7 percent year-over-year increase in transactions during the third quarter of 2019.

The 1,076-square-foot second-floor living space has an open kitchen, dining area and living area, along with a south-facing balcony.Credit...Slovenia Estates

“The housing market has been really good,” said Dusan Lazar, chief executive of Century 21 Ljubljana. “The international real estate crisis hit Slovenia in early 2009, and prices fell almost by 50 percent, and it took a long time to recover, until 2014. But since then it’s been growing like crazy, so basically the prices for new apartments are up to the same levels they were in 2008.”

Ljubljana and Slovenia’s other tourist areas have comparable home prices, with a typical family house running about 200,000 euros ($216,000), Mr. Lazar said. A larger house, perhaps with a pool or in a prime location, runs about 500,000 euros ($540,000). Outside of those areas, prices may drop as much as 50 percent for comparable homes.

The number of foreign home buyers in Slovenia, though small, has grown steadily in the past two or three years, brokers said. Among Slovenia’s chief attractions are its low crime rate, stable economy, convenient central European location, widespread use of the English language and its “beautiful nature, with many forests, lakes, mountains and a small coastline,” said Eva Jakopin Tomazic, the director of Ljubljana-based Elite Property Slovenia.

Even so, when the coronavirus pandemic essentially shut down the residential market in mid-March for about six weeks, real estate agents were already anticipating a cooler housing market in 2020.

“We knew the situation was nearing its peak and a slowdown was expected, even though not such a dramatic one,” Ms. Jakopin Tomazic said.

The dining area has an assortment of hanging lights. Most of the home’s contemporary furnishings are included in the asking price.Credit...Slovenia Estates

While the government won’t have an official accounting for months, statistics shared by the country’s largest real estate agencies suggest that transactions fell by more than 80 percent during the market’s six-week closure, Mr. Lazar said. The European Commission has projected that Slovenia’s gross domestic product will fall by 7 percent this year compared with 2019.

But Slovenia is ready to reopen its economy: On May 15, it became the first European country to declare an end to the coronavirus pandemic at home, though not everyone there was pleased. And in the two weeks since the residential real estate market reopened in late April, activity has been brisk, Mr. Lazar said.

“Let’s say the prices have not gone down, but stayed exactly where they were on March 15,” he said. “There’s been a lot of business in the last two weeks. The only effect I foresee will be on the prices of older apartments and houses, where we might see a drop of 10 percent, or maybe 15 percent, but those prices were too high before March 15.”

Mr. Young believes the post-pandemic recession will differ from the one that followed the 2008 housing crisis. “Slovenia, over the past 12 years, has changed considerably,” he said. “Tourism has grown hugely, and the country is far more well known than 12 years ago. So with more people aware of the beauty and advantages of investing here, it’s likely to continue to be a popular foreign investment destination for the foreseeable future.”

Who Buys in Slovenia

Many foreign home buyers in Slovenia come from ex-Soviet bloc countries, such as Russia and Ukraine, in search of a safe investment, Mr. Lazar said. Retirees from Northern European countries also come in hopes of stretching their retirement pensions, he said.

A terrace on the home’s western side has views of the Polhov Gradec Dolomites, a pre-Alpine hilly region in northwestern Slovenia.Credit...Slovenia Estates

“Here, life is still half the price of life in England or the Scandinavian countries or Germany,” he said. “Plus the weather is warmer.”

Dan Bendall, a director of a real estate company in Ljubljana, said he sees foreign buyers from Britain, Ireland, Belgium, the Netherlands, Sweden, Norway and Italy, among other countries.

In recent years, there has also been a smattering of Chinese buyers, Mr. Lazar said.

Foreign home buyers in Slovenia tend to seek homes in and around Ljubljana, or in the country’s tourist spots, such as the lake districts of Bled and Bohinj, the ski resort area of Kransjka Gora, and the coastal area. Also popular, Mr. Bendall said, are “rural locations in the south and east of the country, where a lot of buyers buy small holdings or farms with land in idyllic hill country or wine country.”

Buying a home in Slovenia has become easier in recent years, brokers said. Citizens of the European Union or member countries of the Organization for Economic Cooperation and Development, such as the United States, can buy without restriction.

Buyers from other foreign countries must form a company to purchase, but the process is straightforward, Mr. Young said.

Real estate agencies, which are heavily regulated, are usually sufficient for purchasing a home, though English-speaking local lawyers are available, brokers said. Notaries, representing both the seller and buyer, handle all sales transactions. Legal costs will typically run about 500 euros ($540), Mr. Young said.

Swings are installed on the north side of the home, where there are also doors to the storage and utility spaces.Credit...Slovenia Estates

A 2 to 4 percent brokerage commission on transactions is often split between the buyer and seller, brokers said. Ms. Jakopin Tomazic said the typical closing costs for home buyers total 2.5 to 3 percent of the sale price.

It can be difficult for nonresidents to obtain a mortgage from a Slovenian bank. “Most of our buyers finance by savings or financing or remortgaging a home,” Mr. Bendall said.

The annual property taxes on this property are about 80 euros ($87), Mr. Young said.